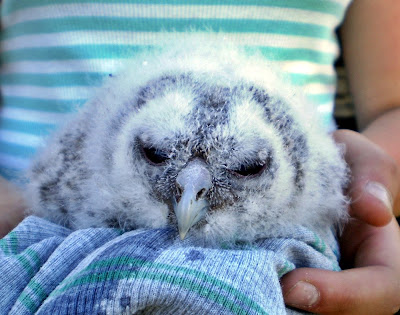 Well what a job we had with this little bundle of fluff!

She was found a week ago on Sunday by my Daughter and her friend when they were riding through the woods. She was huddled on the forest floor so they brought her home.
This wasnt really the right thing to do BUT having said that, I have seen badgers kill and maim chickens, Ive seen the red ants here at home drive fledgelings from their nests and kill them by sheer numbers biting their bodies. So maybe they did do the right thing in bringing her home.
We kept her very quiet, we fed her strips of Venison (luckily the carnivores in the house were having it for tea so we had some meat ). I cant tell you how odd it felt feeding an owl chick! They sort of clap their beak at you.

I phoned the barn owl trust and asked for advice. I have to say I was sorely tempted to keep this little one as we both come from the same wood but I didnt have to think very long to see that it would be a very selfish decision, I would be doing it more for me, than her. They told me she was probably a Tawny owl who had been 'branching' which is apparently when fledglings go out onto the branches next to the nest for excercise. She fell about 70 ft. I was told to take her back and that she would climb the tree back up to the nest.

Down we went with her, deep into the dark woods, back to the tree...

Smooth bark and no branches for 30ft... hmmmm. I climbed a beech tree about 10 yards away and popped her in a nook. We walked away with our fingers crossed that the Mother would return to feed her.

Next morning, she was still in the nook but wobbly. Mr Fairysteps and I traipsed down early evening (taking a pidgeon breast with us... as you do...) and looked for the beech tree. NO OWL. Heart sank into my Quinces... I searched for feathers on the floor where a badger may have had her for pudding, but found none. Mr F went further up the slope and sure enough there she was. She had crawled on the floor about 20 yards up the slope and climbed a tree to safety. A useless 10" off the floor! Once again we had to do a rescue attempt and found another tree with several forked branches and popped her in there, hoping that the branches would keep her in place.
And what happened next... well it was rather special. The Mother turned up! I knew she was there because the blackbirds were going mad all around us. She called softly to her young and I felt so relieved that she had not given up on her chick. She flew in closer watching us all the while. We left, safe in the knowledge that we had reunited them.

We did not go the next day, worried that we should not intervene too much. But on Wednesday evening Mr F went down again. She was not in the tree we had left her in but again was close to the floor further up the slope. I dont think anyone told her in owlish that she was supposed to climb trees to safety! This time a platform / branchy nest was built to keep her up out of the way. We have crossed our fingers and left them alone.

Im going down to find her later... 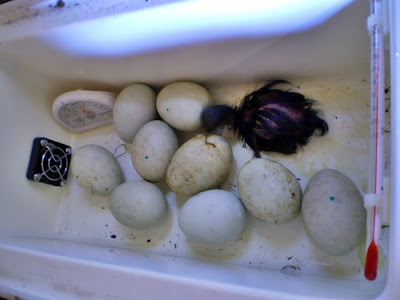 Did I say that Eldest Tiddlywink has been hatching ducklings in his bedroom??? Heres the first one 'Squeebles' out of the shell. They look very bedraggled when they hatch but soon fluff up. 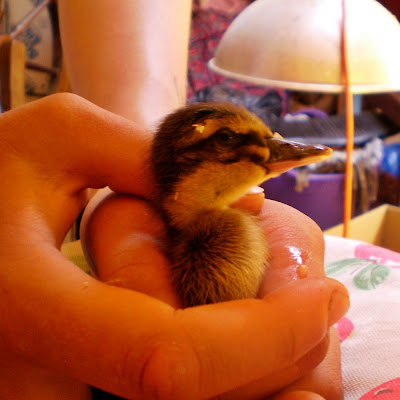 He has now borrowed a bigger incubator from a friend to hatch more.
"So, how many are you hatching in the next batch?" I ask innocently, just wondering if Ive got another small cardboard box that will fit them in once they hatch.
"Ive got 200 eggs coming on Saturday", he replies, offhandedly as if thats perfectly normal and OK.
Im not even going to go into my reply, can you swear on blogger? but suffice to say, the 'hatchery' set up has been happily moved to his shed and Im not even going to attempt to look for a box... Apparently he is setting up an enterprise hatching and rearing rare breed chickens to sell at market for pocket money. Middle tiddlywink has also informed me this week that she will be buying 2 more ponies (with her own savings) at the pony sales to train and sell on at profit. She has a natural gift with horses and practises natural horsemanship with astonishing results (I stand in awe of her) so I have no qualms about this being a complete success.
Perhaps I should have called them Del and Rodney? The 3 wheelers coming next week...
Last note... WHAT on earth is wrong with the blogger picture uploader? Its driving me mad. It keeps shoving pictures at the top of the post. Grrrrrrr

OWL UPDATE! at teatime... She was on the floor again!!! Again Mother called softly to let us know she was there. Little owl clung to me and we popped her up again on high to safety. Mr F is going down with a bucket, hammer and nail later. The Owl trust said to nail a bucket to a tree if she wouldnt climb. We think she has tempted fate long enough on the floor so this is the next move! I took more pictures this afternoon. 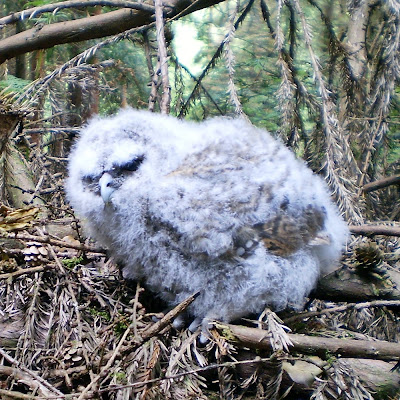 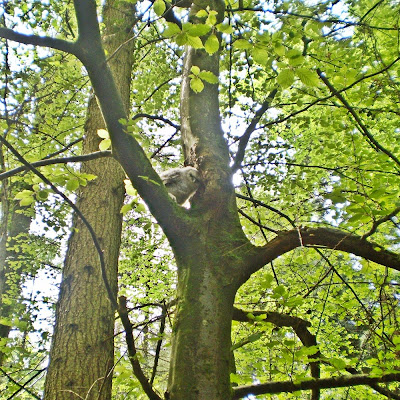 Here is the little Beech tree Ive put her in for a few hours. 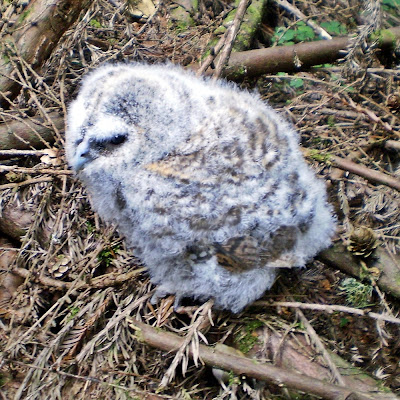 Her adult feathers are coming through and I think she has fed. Her little elbows are bald due to all this rambling about on the floor... silly little Owl. I blame the Mother, I mean I ask you, hasnt she explained what wings and claws are for yet?

I will keep you all updated!
Back to blog