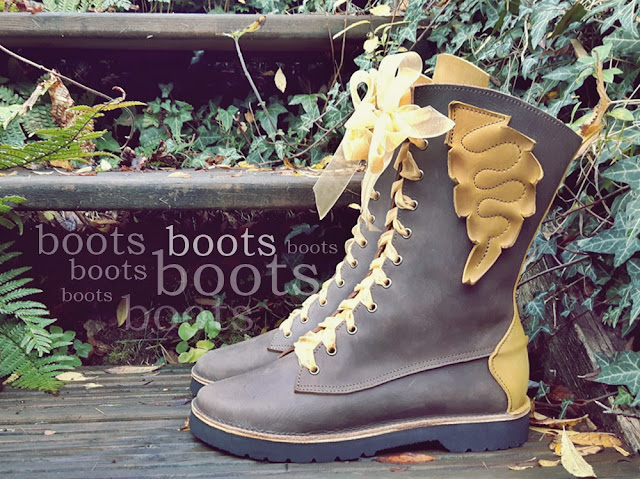 November has most certainly been a month of boots. 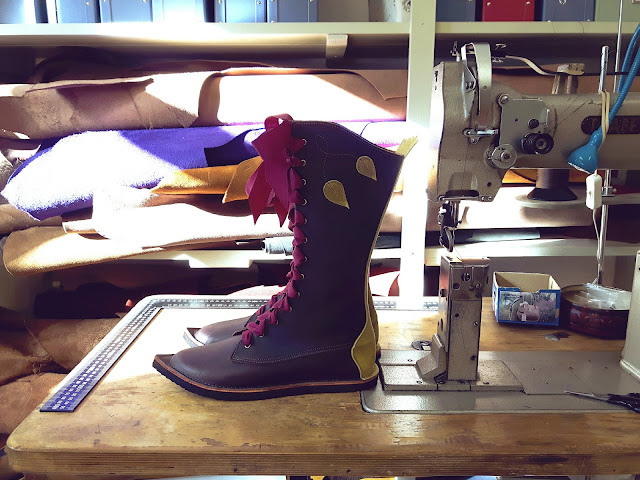 Lots to report for November, get comfy. Most notably, new tall boots have just started being added to the shop. Only a couple of Moonshine boots, but, happy to say that we have made lots of Tinker boots in various sizes. I'm fast reaching 'boot out' so its a small batch by manufacturing standards, but a marathon when its a cottage industry like us. 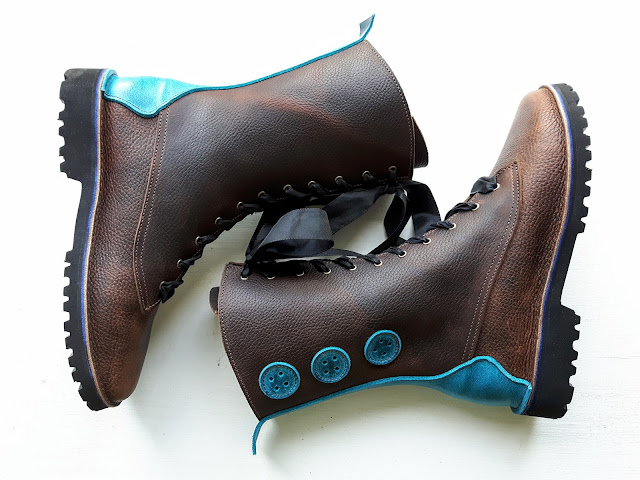 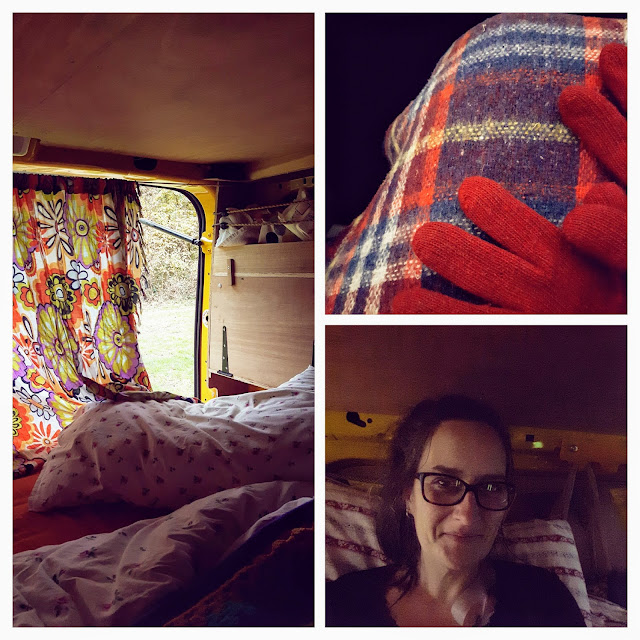 The November camping stint went well (by camping standards). Mr F got to see his bikey friends, and I camped in the van in frosty conditions in Winter which was a bit of an adventure. I can honestly say that the pub Did Not know how to make a decent cup of tea. It was grey and lukewarm... One was Not amused. I ending up having to move onto the hard stuff at the public bar, having just milk instead. It was a small room, stuffed to the ceiling with leather clad males and a wood burner roaring in the background. I got so dehydrated that I woke on Sunday morning with a splitting headache and was ready for home. Felt very guilty because I did not say goodbye to the party.

On a lighter note... little pink kettle and tea making facilities on the back of our van at 7 o'clock on a frosty Sunday morning drew quite a crowd. I was inside the van, behind the curtain, quietly nursing my head, but Mr F (the trooper) was brewing up out front and chatting to chaps. The conversation with these 'chaps', who we had never met before was quite amusing :) They chatted among themselves for a good 10 minutes. The conversation was mainly about a Woman called Tina's, ample, incredibly wobbly bosom, which was prominently displayed where they sat, propped in front of her on the table for the evening. In thick South End London accents I heard details of how the "sight of 'Tinas t*ts' all night" had driven some of them to retreat and hide in their freezing tents. Unable to contain themselves. Much raucous laughter and expletives followed.
One chap then commented on how organised Mr F was having a tea cosy for the pot 'and everyfink'. Mr F then replied, that it was down to the wife and pointed inside the van.
"What! You've got a lady in there?" one said in a terrified voice.
"Cor blimey, we've been effing and jeffing and all sorts out ere".
Frantic Mumbled murmurings of apologies followed... then one chap said loudy, "Tescos have got medium cheddar on offer at ours, 2 for 1, blimen lovely stuff it is".
Once the 'cheese on offer' conversation was exhausted they drifted away and headed to the sanctuary of the pub. Possibly first checking to make sure 'Tina' was absent ;) 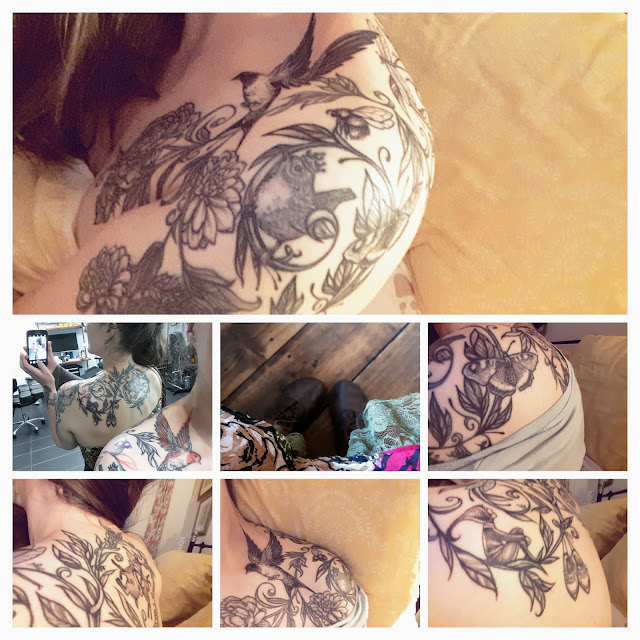 I was indeed covered in cling wrap and am happy to say that my inking is complete. Beyond happy with this. I am healed now too with just a smidge of itchyness left. Huge thanks to such a clever artist Flavia Verda, who brought together all my ink, new and old. My story is complete. 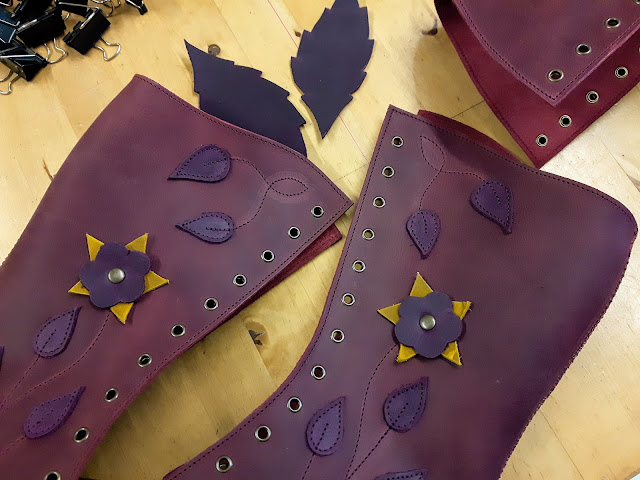 Pimpernel Moonshines, now finished and all but ready to list. 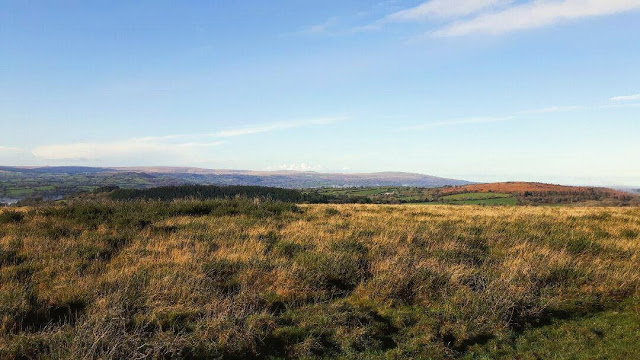 Now then, the running bit of the title... Started last week with a friend doing a little bit of off road running. Possibly 'runpuffing' would be a better way to describe what actually happened. I can hear you laughing you know...
Its okay, I don't mind...
We had a good laugh too...
I'm not buying special clothing or shoes. Its a definite, use what you've got activity for us. My thoughts are that if early surfers last century could go surfing with wardrobe doors and knitted swimsuits, then I can do a bit of running in a skirt. Yes indeed.
I wore my Connie shoes, laced up snug. They were brilliant. I did'nt slip, my feet felt great, no sweaty toes or socks and they really enjoyed the adventure. I may make myself some Clara to use exclusively for this past time.
Heart was pumping for England so I'm assuming its going to be good for me. Aiming for twice a week. 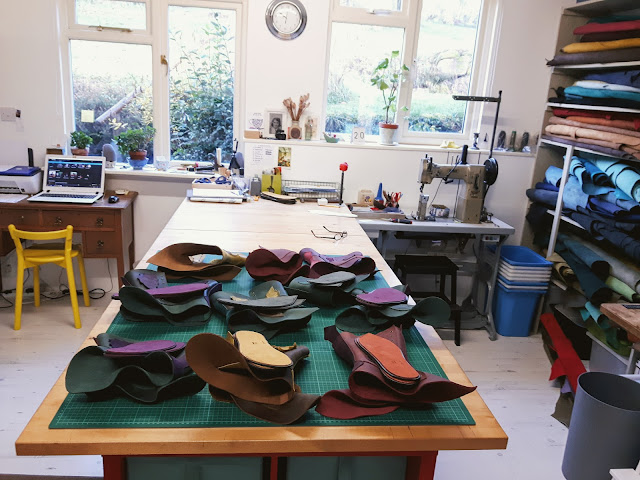 What 10 pairs of boots look like partly made. Table now clear and ready for the next batch of marking up. Cobwebs I think. And a new variation of Cobweb which I'm calling Neverland. 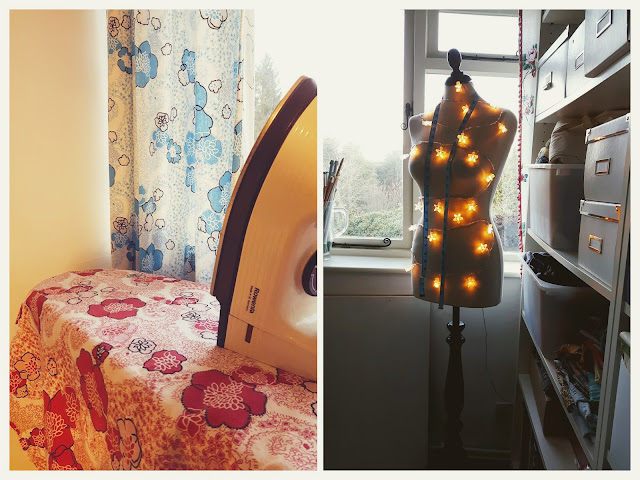 Finally cut 2 more tunics in a lovely linen viscose I bought years ago. Yes, I know the curtains are the same fabric... I bought rather a lot at the time :) The colour is a definite no for me, and the pattern to be honest, but over dyed a dark blackcurrant its going to hopefully look rather nice. 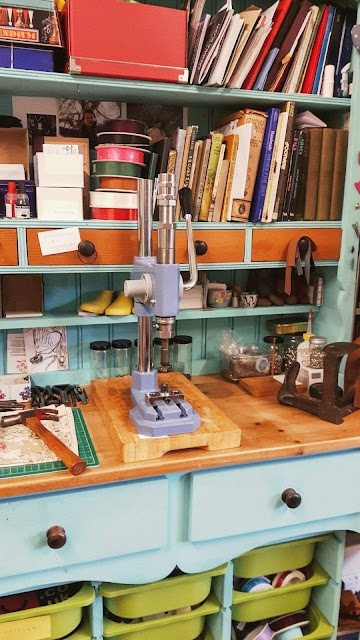 My new toy, sorry, meant to write tool then. A stronger, easier eyelet setter. After setting 500 eyelets on the boots my hand nearly fell off... hence, the new, easier to use tool. Pretty colour too, which is always a bonus. Mr F never buys tools because they are a pretty colour. Its a good job someone here knows their priorities isn't it. 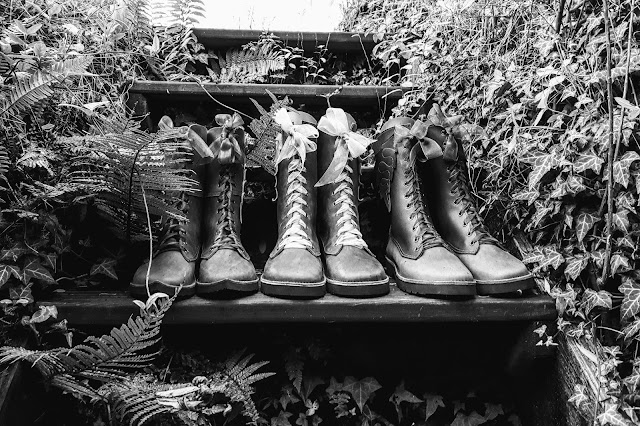 Finished Tinkers, taken this morning on the back step. What a trio.
Next boots to list will be Cobweb, Moonshine and more Tinker.

December tomorrow, we get to play christmassy music and put up the little plastic tree :)
That's about all I'm doing for Christmas. In fact I'm weaning myself off Christmas. I love this time of year, but its driving me a bit mad. Its an environmental disaster for one thing, and the hype and expectation is beyond belief... I'm humbugging so I must apologise if you are Christmas fan. I hope you enjoy every minute x I will too, but in a much tinier way :)

Custom collection is set to open after the 25th December. Keep it under your paper hat ;)

Did you read all that? You deserve a hot cup of tea! I need one after writing it, let alone reading it...
Thank you my dears, Ren x